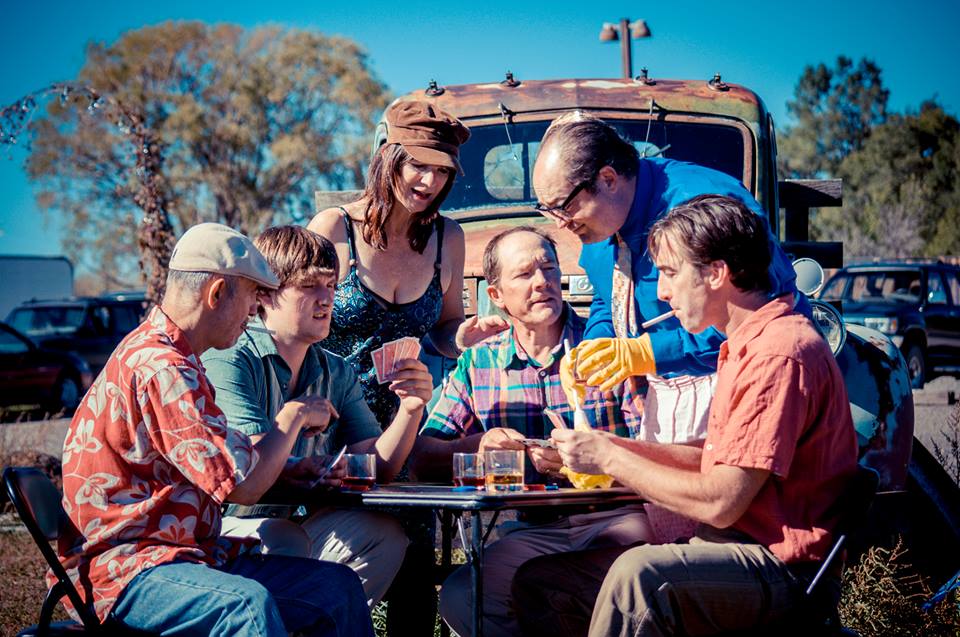 Roommates. We’ve all had them — some good, some bad, some indifferent. Ironically enough, it’s usually the people we’re closest to that end up being the worst roomates. Why? Well, if you’re looking for the funny answer, you’ll find all that and more in Teatro Serpiente’s production of Neil Simon’s comedy The Odd Couple.

Meet Oscar Madison, a 40-year-old sports writer living in New York in the mid 1960’s. He’s a man’s man, hosting Friday night poker games with the boys in his apartment, smoking only the finest cigars, and whenever possible enjoying a gourmet meal. Oscar has it all — a great job, an eight-room apartment, and a beautiful wife. Oh wait, that beautiful wife left him six months ago, and she took the maid with her. Not much in Oscar’s lifestyle has changed, in fact he still can’t figure out why Blanche left him, but now he rattles around his big eight-room apartment by himself with just his dirty laundry, moldy sandwiches, and cigarette butts to keep him company. There’s also no one left to clean up after him. A fine bachelor life — or so he thinks.

Then, late one night during a poker game, Oscar’s friend Felix Ungar busts through the door announcing his wife wants a divorce. Felix is so broken up his friends are afraid to let him go to the bathroom alone. Oscar invites Felix to room with him in his bachelor pad until they can get him back on his feet. Little does Oscar know that when Felix accepts he’s getting more than he roommate. He’s getting a live-in maid, gourmet cook, and the general uptight, neurotic, nagging mess that is Felix Ungar. And then there’s all those little things, like his unique sinus conditions and a penchant for obsessive vacuuming.

The Odd Couple is Teatro Serpiente’s final production of their 2013 season. In addition to being a stage play, The Odd Couple was adapted for the screen, and, as most of us know, was a popular television show in the 70’s. Fall is in the air, and the nights are getting colder. Teatro wants audiences to walk away with smiles on their faces, warm feelings in their hearts, and perhaps a bit of nostalgia for a good old fashioned feel-good comedy to buoy their hearts during the winter months. The show is directed by guest director Susan McQuade, who played Robin Starveling in this summer’s production of A Midsummer Night’s Dream. The cast includes Teatro core members Rich Greywolf and Scott Tennant as Felix and Oscar, respectively. Ruth Farhbach, Adam Overley, David Perez, and Jim Sanborn as the poker boys, and Jane Ayles and Michelle Moore as the Coo Coo Pigeon Sisters.

Don’t miss Teatro Serpiente’s The Odd Couple at Working Class Theater’s Playhouse. Showdates are October 10th, 11th, 12th, 13th, 16th, 17th, 18th, and 19th. All shows start at 7 p.m. with the exception of the Sunday October 13th matinee at 4 p.m. Doors will open a half hour before showtime for light refreshment, coffee, and tea. Tickets are $15 with a matinee special of $12 tickets for reserved groups of 5 or more. There will also be an open dress rehearsal “freeview” on Wednesday, October 9th, for those who cannot afford the full ticket price — or those who are interested in seeing the show twice!

Teatro Serpiente is a community theater organization with a deep commitment to fostering arts in Taos and the surrounding areas. For reservations and more information please call 737.8574 or visit Teatro Serpiente’s facebook page. See you there– for a beer-can-exploding, peanut-throwing, rollicking good time. Would you expect anything less?